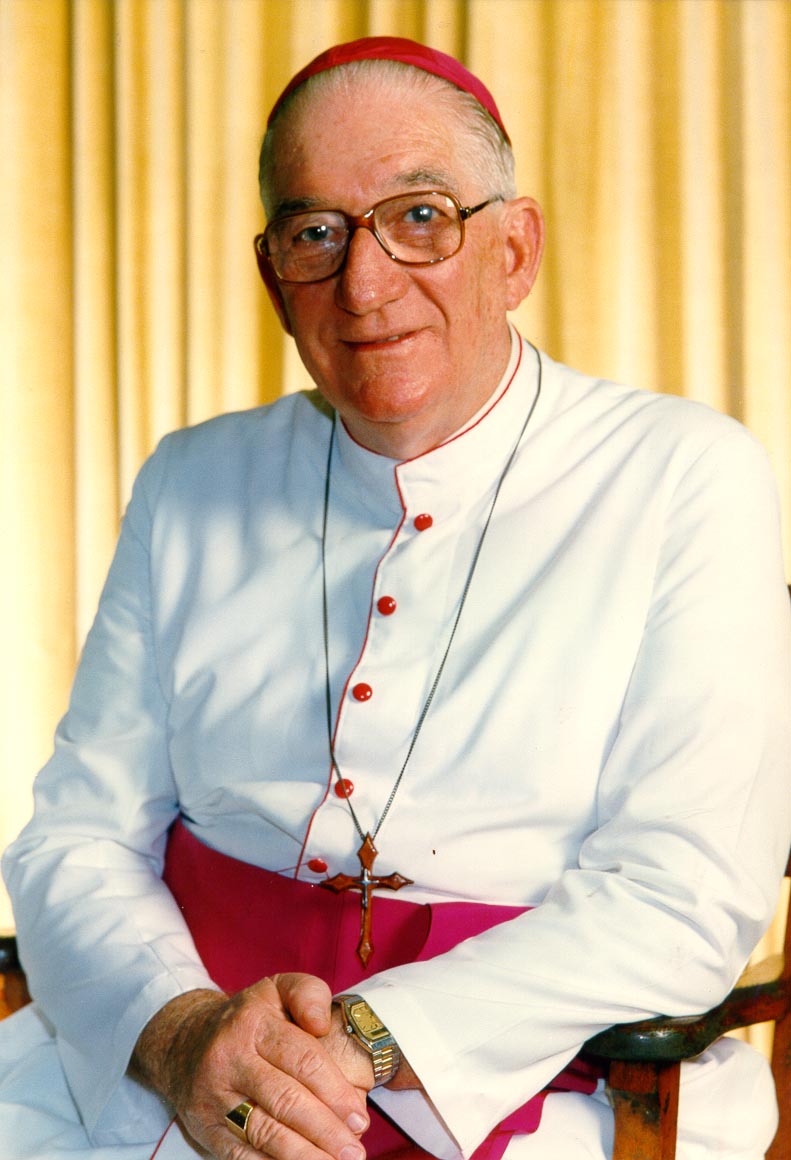 Fr. Michael Lowcock, Diocesan Administrator of the Diocese of Townsville, regretfully wishes to inform the community of the death of Emeritus Bishop of Townsville, Reverend Raymond Benjamin.

Bishop Benjamin turned 91 on the 24th of February this year. He was born in Rockhampton in 1925 and was educated atOur Lady’s Infant School and later at the Christian Brothers College, West Rockhampton. After completing his training at the Pius XII Provincial Seminary in Brisbane, he was ordained by the Most Rev. Andrew Tynan, Bishop of Rockhampton on the 25th of July, 1949.

As a Priest, he served in many parishes in the Diocese between 1950 and 1984 when he was elected as Fourth Bishop of Townsville on the 14th of February 1984.

Bishop Benjamin was consecrated as Bishop of Townsville on the 9th of May at an outdoor Ordination at the Dean Park Soundshell by Most Rev. Francis Rush, Archbishop of Brisbane.

Diocesan Administrator Fr Mick Lowcock said “Bishop Ray came as a real pastor of this Diocese, he was open to new directions for the Diocese and was willing to support the parishes in many new directions.”  “In some ways he was a leader before his times,” Fr Mick said.

Bishop Benjamin submitted his resignation to the Holy Father on the 1st of February 2000 and it was accepted on the 18th of April. He was then directly appointed as Apostolic Administrator of the Diocese until the 24th of January 2001 when Bishop Michael Putney was appointed as 5th Bishop of Townsville.

“Many saw him as a wise and loving Bishop. He was a good preacher, a great story teller and loved Townsville after coming from Rockhampton Diocese where he served in many country parishes – Mount Morgan, Tambo, Yeppoon,” Fr Mick said.

Bishop Benjamin’s family were well known in Rockhampton and his only surviving sibling, Bernie, married to Jill, is still in Rockhampton. He was fond of his family and travelled overseas for their weddings and others occasions.

Since his retirement to Brisbane as Emeritus Bishop of Townsville, he has kept a keen interest in the Diocese even though his health has declined. He has been in Marycrest Hostel for the last few years and kept alive his love of music there. He was deeply involved in life there and was a welcome addition to their choir. His Welsh heritage was dear to him and in later year he revived his love of playing the cello.

Have your say on religious freedom, Catholics urged

Pastoral Letter to Catholic Parishes and Agencies re. Safeguarding practices The events of last week involving the arrest of the Principal from St Joseph’s Catholic School Mundingburra have shocked the entire community.  I too was deeply upset and s...
Read Full Article

Bishop draws further attention to those made vulnerable by VAD

Bishop draws further attention to those made vulnerable by VAD  Bishop Tim Harris believes the concerns many indigenous people hold over Voluntary Assisted Dying (VAD) have been overlooked and underestimated and should further delay its legislation. Speak...
Read Full Article

Catholic bishops call for new solidarity in election statement Queensland’s Catholic bishops believe the state must discover “a new kind of solidarity” to deal with the impacts of COVID-19 and to find a way beyond the pandemic.  The bish...
Read Full Article

The Australian Catholic Bishops Conference and Catholic Religious Australia have today published an “important and substantial” document on the review of diocesan and parish governance and management in Australia. The review was recommended by the ...
Read Full Article

A WORD OF ENCOURAGEMENT TO THE CATHOLIC PEOPLE OF AUSTRALIA FROM THE BISHOPS OF AUSTRALIA Dear brothers and sisters, Grace and peace to you in these Easter days. We write to you from a plenary meeting of the Bishops Conference which is like no other...
Read Full Article

FIRST ASSEMBLY OF PLENARY COUNCIL POSTPONED In response to the dramatic changes caused by the COVID-19 pandemic, the bishops of Australia have made the “difficult, but necessary” decision to postpone the first assembly of the Plenary Council. Chang...
Read Full Article